So it was titled – The Case for Keeping the Pound

What a different world it was then – I forgot I did this and found it again recently. I think it stands up pretty well, except of course Rover isn’t with us anymore, the Bank of England doesn’t quite have the halo it used to and the Wall Street Journal actually used to support Britain joining the Euro. All credit to the WSJE of course for publishing a letter that disagreed with their editorial.  And the value of sterling in Deutsche Marks now would be about 2.35 marks to the pound – so even Rover probably could have done alright on that.

I have also appended it below – don’t think they’ll mind too much.

Letters to the Editor
From The Wall Street Journal Europe

So, The Wall Street Journal Europe thinks Britain should adopt the euro (“Answering Thatcher,” May 25). Well sterlingphiles like me disagree. So far, too much attention has been focused on the failure of the euro to achieve stability on the foreign-exchange markets.

It is more relevant to look at the performance of the British pound.

Over the last century, Britain has taken almost every wrong direction in monetary policy. Broadly speaking, this involved fixed or targeted exchange rates, and the prioritizing of growth and employment over low inflation.

However, since sterling was thrown out of the EU’s exchange-rate mechanism in 1992, there has emerged a consensus that inflation can be controlled with short-term interest rates, and that low inflation is a prerequisite for growth and employment. Since then, the economy has blossomed magnificently. No one could dispute that over the last 10 years, British growth, employment and monetary stability have easily outperformed Britain’s European counterparts. Moreover, the Bank of England has a level of professionalism, insight and transparency that puts the European Central Bank in the shade.

Britain needs a currency that is neither wholly European nor American. Some 85% of the U.K. economy is not dependent on exports to the EU. And for the 15% that is, one can safely assume that the Euroland countries would not agree to Britain joining where most British exporters like Rover would like it, at 2.5 marks to the pound. The reality is probably closer to 3.4 marks. That sterling has appreciated against a weak euro and stagnant European economy, but depreciated over the last year against the mighty dollar, suggests that we have the right balance through monetary independence.

Our future will never be with one continent, but with the world. Only a floating exchange rate and an interest rate set to preserve monetary stability in Britain can safely steer the U.K. through the uncertainties of the global economy. It’s time for The Wall Street Journal Europe to reconsider its view on Britain and the euro.

I really enjoyed being in Berlin (or rather Potsdam) last September and presenting this paper to a conference organised by the excellent Friedrich-Naumann Stiftung Fuer die Freiheit – the think tank of the of German Liberal Democrat Party. And full marks to them for having an excellent url www.freiheit.org – i.e. freedom.org !

It’s not fashionable to be optimistic about our energy future but I am and this paper outlines some of the reasons why. There were a lot of thoughtful questions from the audience which I always savour as well. Although I speak German and nothing like as well as I used to, one had to admire that the whole conference was in English as were the questions. Sometimes a speech doesn’t “translate” well to the written word but this one reads well  – if I may immodestly say so.

Anyway, here is the paper.

Dear all, forgive me for being a bit remiss in updating this website – I have been concentrating my efforts on www.economicpolicycentre.com, www.future-es.com and www.ukcrimestats.com

Anyway, there are some changes coming shortly to www.danlewis.org because looking at it now, I realise quite a lot of it is out of date and I’m missing a large number of articles that I have written in the recent and distant past.

In the meantime, here is an interview I did at 3 in the morning a few days ago on American Conservative Radio with John Terry – about 40 minutes and despite the early hours, I really enjoyed it.  Both my hosts were very easy to talk to – real pros – and we covered the Euro crisis, shale gas, energy security and renewable costs.

It’s a shame we don’t really have talk radio in Britain – over here it’s all about soundbites, quick questions and answers and then it’s over in 3-4 minutes. So it was doubly nice not to be interrupted, be given time to make a point and think of something else on the hoof to say !

Thanks again to American Conservative Nation for inviting me on to their show.

To the news again !

Congratulations to the All Party Public Administration Select Committee led by Bernard Jenkin MP for producing a report. I haven’t seen it yet but the headlines that I have are basically correct – as I explained in the Yorkshire Post a few months ago, this was no bonfire.

Speaking on LBC to Nick Ferrari this morning at around 8.10 a.m. I argued that  quangos are right at the heart of the debate about the future of delivering public services. Right now, too many are delivered in a market vacuum by quangos who are under no commercial pressure to perform. The Cabinet Office should look again at this and ask questions like;

Can their functions be outsourced?

Does the said quango duplicate another in the public sector or crowd out an existing or potential one in the private sector?

Can they be relocated to a lower cost location?

To be fair, the real progress of the Coalition Government’s dequangoisation drive has fallen outside of the Cabinet Office’s review – the scrapping of the Primary Care Trusts and Strategic Health Authorities giving budgetary control to Doctors and Michael Gove’s educations reforms, giving schools more control over their budgets, independently of the education quangocracy.

So it’s time to start again and the Cabinet Office could do worst than produce a full annual NDPB report one place – including those of the devolved administrations – not done since 2006. That was when a 372 pages long report dropped to 26 in 2007. 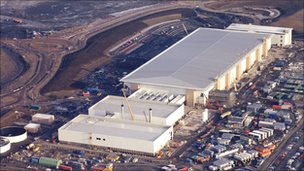 In the last 10 days, we’ve had a surprising amount of news about gas that requires some digestion.

Starting with yesterday’s discovery of shale gas near Blackpool by Cuadrilla Resources – the best news that town has had in a long time.

Then there’s the ongoing cold snap in the UK combined with a long acknowledge inadequate storage capability. As I wrote a year ago in Securing Our Energy Future Chapter 3: Don’t Bet on Gas – The UK Way, END_OF_DOCUMENT_TOKEN_TO_BE_REPLACED

Ok, I need to update this site a bit more often. I’ve just written two posts. One for the Economic Policy Centre blog on the brewing China/USA dispute over trade and currency valuations and another for Future Energy Strategies blog on the great potential and thus far unanticipated outcomes of  plug-in hybrids.  Enjoy !

In the ideal world, everyone would share and practice our values of Liberal Democracy or at least feel unthreatened by them and in no way want to undermine our freedom. Unfortunately, only perhaps 1 billion people of this planet’s 6.8 billion live under liberal democracy,  a billion more  in India have elective government which is becoming more liberal and the remainder exist under various levels of autocracy.

So that’s why we have a defence budget and why I’m more than happy to picture an aircraft carrier on my home page.

Today Britain finds itself squeezed between Western Europe that has long lost the will to commit troops in scale to defend its own interests and Obama’s America, which has proven itself to be all too flattering to its enemies and at best, unsupportive of even its most stalwart allies.

So I’m very worried at the current spat on defence spending being orchestrated by the Treasury, which looks like a re-run of the outcome of the 1966 White Paper when everyone lost. Back then, the cancellation of the CVA-01 large carrier project eventually led to the invasion of the Falkland lslands by a dictatorship which a less forceful Prime Minister would have done nothing about.

And then of course, the disastrous cancellation of TSR-2, some say on American instruction which hobbled the RAF with sub-standard frontline aircraft for the next generation and a half.

And now the Treasury think they’re very clever by demanding Trident should be paid for out of the Defence budget which will lead to massive cuts elsewhere in the Armed Forces. Perhaps then the Treasury mandarins might share with us the cost-benefit calculation which shows that the UK would be better off succumbing to nuclear blackmail or a mushroom cloud over London?

My guess is they haven’t done one.

A pity because by and large, most of us might think that a weapon against which there is no defence is worth having and solves a problem we will never have to deal with. That, on the face of it, is the priceless value of Trident.

So writing today in the Sunday Telegraph, General Sir Richard Dannatt is mistaken to believe that without the hugely expensive JSFs, the carriers are doomed. As was picked up in the Sunday Times, the Royal Navy could easily switch to the much cheaper Super Hornet which the US Navy has pledged to keep using for at least another 10 years.

There are literally dozens of choices like this that can be made in the procurement budget. And it’s just not credible to suggest that “. . . The answers lie with more and smaller ships, and land-based planes whose range is enhanced by a renegotiated air-to-air refuelling programme“. I know of no future scenario where the RAF has more rather than less friendly bases to operate from. The only serious response to this reality are long-range large aircraft carriers that can work from anywhere.

There’s only one thing more expensive than fighting a war and that’s losing it. Deterrence through strong defence is the cheapest option of them all because it works like an insurance policy and we neither have to fight or lose.

Ok, here they are.

I have to say, they look pretty generous to me. I’m going to do some back of the envelope calculations and come back with a new table that shows the yield per technology. As I wrote recently in Utility Week, if we really do get a boom in micro-generation from the 1st April when they come into force, this will not be without problems.