The future of Connected Business

Financing our future: infrastructure in an age of prolonged austerity

The New Road Ahead

Published: May 2013 (Institute of Directors)

Will we ever run out of energy? The history and future of technological progress and energy supply

THE UK SPACE ECONOMY: THE PRESENT AND EXCITING FUTURE

RETHINKING TENNIS FOR THE BIG SOCIETY

SECURING OUR ENERGY FUTURE – Why and how it must be done 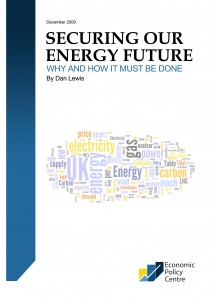 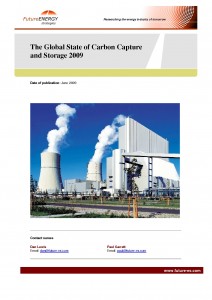 A one-stop report for all you need to know on CCS around the world. What is happening, what are the technologies, what are the problems, where are the opportunities?Complete with tables, charts, and data, this launch paper will provide a timely and authoritative analysis of a technology that has generated plenty of publicity but not enough detail. Read more and buy the report from here.

Europe is heading into the deepest recession of the post-war period but there is not yet a debate about how to curtail EU public expenditure on its quangos.

The Essential Guide to EU Quangos 2009 does this and more, by answering these questions of the 36 bodies;

What is their annual budget?
What do they spend on staff costsa and basic salaries?
What is their defined role?
Where are they located?
How many staff do they have?
Who is in charge and what nationality are they?
Do they duplicate existing public sector activity?
Do they crowd out private sector activity?
Could their role be competitively outsourced to the private sector?

Amongst other findings, the report also reveals which bodies have the largest budget, spend the most on staff, the rapid growth in agencies and makes policy recommendations for reform-minded EU policymakers.

The Digest of Energy Statistics 2008

By Dan Lewis and Nigel Hawkins

Most energy statistcs are meaningless – without a context. The Digest of Energy Statistics 2008 is the first annual report which includes – amongst its 27 tables – selected World and EU rankings on electricity consumption, energy reserves, electricity and gas prices, energy efficiency, carbon efficiency and the comparative cost of electricity generating technologies.

The Larceny of the Lottery Fund 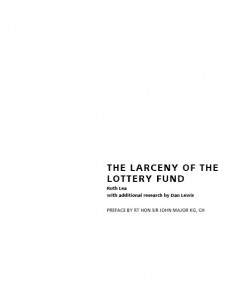 The Essential Guide to British Quangos 2005 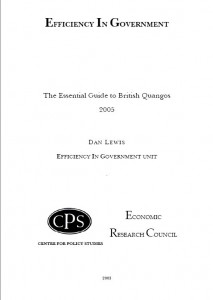 The paper that started off the whole debate on quangos. Loved and hated by many, it was the most successful think tank paper of 2005. And five years on, I still get people asking me about it and even the occasional green ink letter !

A vital and timely study of the costs and challenge of meeting 10% of electricity from renewable sources by 2010 and beyond. How do Solar, Wind, Water Power and Biomass measure up against each other? What can be done with Government Policy to make the 10% target more achievable? Dan Lewis cuts through the jargon and places the question of renewable energy in a larger economic and political context.